What do the Fish in the sea think of the financial crisis? (and what do we think?)

The Art Committee of De Nederlandsche Bank (Royal Bank of the Netherlands) & Art Partner present seven young artists in the exhibition space of DNB. The fundamental idea of the exhibition is to show new, experimental and progressive work. The artists were selected on their individual development and the media in which they work: tapedrawings, wall installations, drawings on paper, video's, objects and projected image.

For the making of "G O U D - What do the Fish in the sea think of the financial crisis?

What do the Fish

WHAT DO THE FISH ... / by Tristan Mostert

As What do the fish in the sea… takes shape in the workshop, the world economy is in crisis. Very few people outside the financial sector have a clear understanding of what this crisis is, or how it came about. Terms like ‘sub-prime lending’, ‘default credit swaps’ or ‘securitized mortgages’ have been buzzing on the television and in our newspapers, but we do not understand what they mean.

When bank after bank got into trouble in the summer of 2008, the struggle of newspapers to make the crisis accessible, to give it a face, was almost palpable. Front page photos showed fired employees of bankrupt banks carrying their boxes with belongings outside the door, directors of national banks whispering in each others ears, stock brokers with panic in their eyes. It didn’t help. The news might show victims of the crisis, or people involved in it, as human. The crisis itself, however, is some huge abstract absurdity to us. It has no human face.

We do, however, have a vague, blurry notion of what the crisis is. It involves banks and brokers irresponsibly continuing on a path which they felt had to go wrong at some point. It involves huge skyscraper bank headquarters on Manhattan or in Central London, where haughty, greedy, selfish people in expensive suits suddenly saw billions of dollars, euros, pounds, vaporize as a result of their own actions.

For as long as cities have existed, moralists and conservatives have considered them to be immoral, soulless, corrupting and sinful. To them, a city was the dwelling place of money-grubbing traders and bankers, prostitutes, drunkards, a place where selfish people made money without producing anything themselves. It was a place of hubris, where Man built high towers to show off his power and wealth. And above all, it was a place of godlessness, anonymity and despair.  Whether we agree with them or not, this crisis has done little to belie this image of the city.

What a contrast to the second image of the work. Fish, green fish! When we stare into their big, fluorescent eyes, it is hard to think of the financial crisis simultaneously without laughing. What do they think of it? Absolutely nothing, obviously! Our planet consists of water for 70 percent. In the realm of the fish, the financial crisis does not exist.

The third image once again brings us back to the realm of humans and their trouble. We see them, all kinds of them, on a flight of stairs, trapped between the railings. The stairs are supposed to guide their movements, give them a direction, bring them somewhere, but in spite of this, they seem lost. If we want to know who these people are, the direction they are taking within the set structure of the stairs certainly doesn’t tell us anything. The few things we learn about these people is to be found in the things they carry, their facial expression, the small interactions between them. The structure is, once again, nothing but a structure.

In the fourth image, we see a desert landscape, a sea of sand, the words ‘financial crisis?’ ominously underneath it. We might be tempted to interpret this image as some sort of apocalyptic prophecy. Is the crisis turning the world into a desert, is the desert a metaphor for the nature of the crisis, or its ultimate effect? I think we should resist the temptation of interpreting the image that way. Instead, ask yourself the question: when you’re in the middle of a desert, all alone at night, what do the words ‘financial crisis’ even mean? 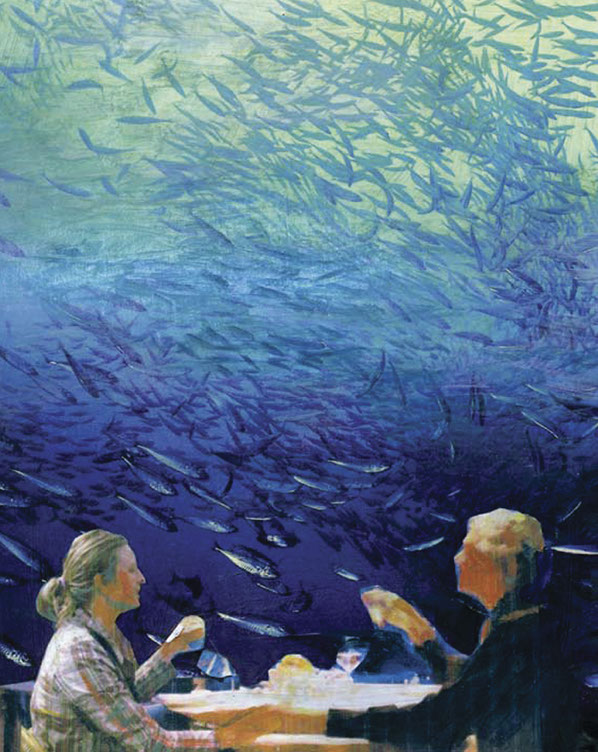 Hi Machteld. The Chinese pronunciation of "Fish" is Yu which sounds exactly the same as another character Yu meaning "Surplus" . Therefore, in a traditional Chinese New Year's Eve dinner table, fish has to be served to wish for a new year and another year with "surplus" or plenty of savings, or having more than enough etc. Upon the fish dish (must be the whole fish, not cult fillet) was brought onto the table, a famous Chinese idiom is usually announced by everyone on the table: "Nian Nian Yo Yu" meaning "Wish you have surplus every year". So, this is probably why fish is associated with fortune (more about money and profits but not about good luck).

And it is interesting you mention the fish eye, which for Chinese gourmet is the best part for the fish dish. The part of fish head; especially the eyes are considered the precious delicacy that usually reserved for the eldest or the most respected individual when eating at the same table. It is also worth mentioning about the Chinese character structure of fish, which is graphically beautiful. If you have time you should look it up on the Internet and take a look at it. Jeane

When men define things as real they are real in their consequences. The Thomas rule.

The Sky is no longer the limit.

Shop till you drop.

Arriving at the airport of Dubai I liked the plastic palm trees and the desert carpet.

Dubai is in the desert. Our house in the Meadows of Springs.

Dubai is a melting pot of cultures. The people are there for a reason: money and gold.

Everything goes down. Deep down.

We like fishing, we go out fishing.Kingfish, starfish 30 km off the shore.

A highlight is that the traffic is less.

Buildings are half finished and they are left as a ghost site.

Plato is totally right: real happiness is the product of the eternal force of EROS. This desire is extremely strong but only wise people know how to handle this. The silly ones regard it as a sexual force or a sad force for luxury; wise men see it as the force for eternal beauty only accessible for the soul.

Machteld’s visionary, artistic and even poetic visualization of power can inspire the spectators to approach the creation of her images both realistically and idealistically.

In the image of ‘The Stairs’ the tragedy of human mankind is represented. We as human beings may reflect about our personal behavior or that of others; we can make choices whether to continue or to change behavior. Due to this freedom behavior evolves likewise the people demonstrate on the stairs: not with each other, but against each other: upstairs versus downstairs. On this ramshackle construction the movements are not without risks and the resulting chaos is unproductive.

The image of ‘The Skyscrapers’ shows to which kind of society this freedom can lead. A society of gigantic, gloomy, threatening blocks of armored concrete, populated by masses of non-interrelated people, concentrated in mass-conglomerates of multi million inhabitants, in Africa, South America, Japan, China, USA, …., people abandoned from nature – except from birds, rats, vermin that live from the waste of our civilization – and people trying to defend themselves against air pollution through masks on their mouths and noses. Is there anybody who likes to create such cities? Are they the outcomes of the many in power having taken the decisions for such solutions? Driven by ego-motivated arguments?

Have a look at ‘The Fishes’: the mass school of fishes with their alert small eyes. They are not intending to give sense by words but are guided by their instinct to form large schools as protection against fishes of prey. All noses are in the same direction. Compare this with the people of ‘the Stairs’: it is seldom that people can achieve such behavior.

However, in and through the pictures of Machteld also hope is created: it can be seen in ‘The Stairs’ how two persons are making a relationship and are going to do something together. They may be able to persuade their stair-opponents to cooperate.

There is also brightness expressed through much light in the images of ‘The Skyscrapers’ and especially in ‘The Desert’. It shows Light as the symbol of life and hope.

The emptiness in ‘The Desert’ suggests a double meaning: one can experience it as solitude but also as emptiness to be filled. But, desert is nature with its numerous hidden animals and micro-organisms. And deserts can become fertile by means of well designed irrigation systems.

Our society can be made, in positive sense.

Dear spectator, feel the pain but also experience the open challenge of Machteld’s play of images, that invites you to cope with and handle the severity of power of our society in 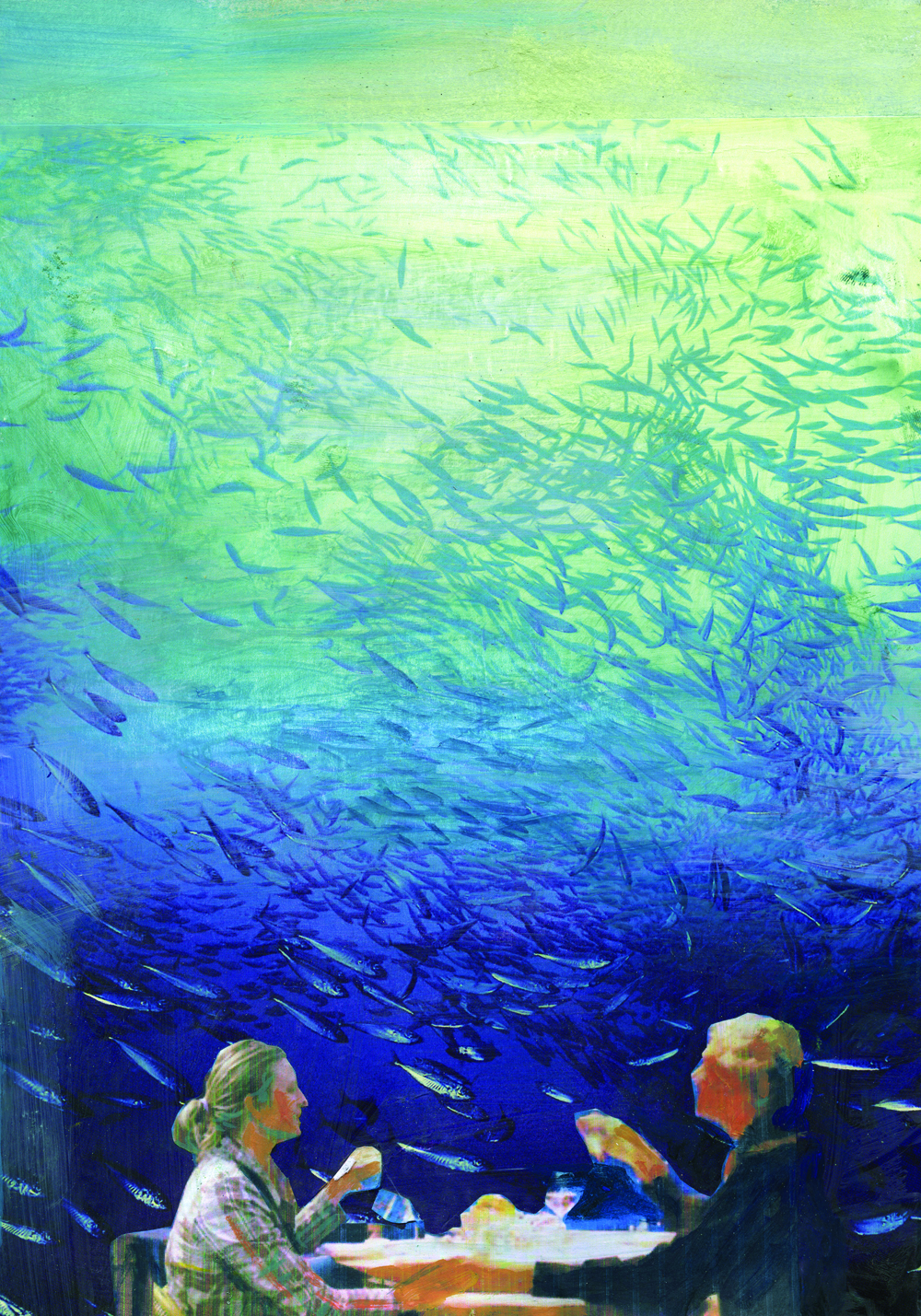